“The day President Harding died, Paul picked me
up in his Ford Model A Pickup. We worked
the gold mine near Franklin Mountain. I swigged
A & W Root Beer, chewed Vienna Sausages.
Paul rolled a cigarette, then we rumbled toward the mine.

That Thursday, another cloudless day, sweltering. No breeze.
Hot enough it’d about wilt tobacco. Bearable 100 feet down.
I picked, shoveled rocks and dirt into wheelbarrows.
A few young bucks toted them, dumped into a large bin
attached to ropes. Mules pulled it to the surface.

Hell, we might get a few cents per ton. I must’ve sweated a bucketful
by quitting time. Most miners had no shoes. Damp black soil
stained our bare feet over our ankles. Locals called us
‘Black-anklers’ but shopkeepers didn’t mind our money.
After work that Thursday evening a few of us climbed

onto a foreman’s truck and he drove us toward Steeds,
the truck kicking up clouds of dust—the fool drove real fast.
Quarter mile from Steeds, he gunned the pedal on a curve and
the truck listed—we slammed to one side, down a slope,
flipped over and over. I struck a pine tree and was out like a light.

I woke, black as night, on a speeding train with all sorts of people—
some dressed highbrow, some in rags. Behind the engine, our car had
no windows. Some dark figure shoveled coal into the roaring furnace.
The engineer turned his head—face was dark with soot and evil looks.
The boiler roared. We zoomed faster and faster, got hotter and hotter.

We yelled ‘Stop!’ but the engineer waved as wind whipped our cheeks.
He yelled “You paid full fare and now you’ll pay your due.’
He slammed brakes and we screeched to a stop. ‘Welcome to paradise.’
Dark things prodded us off with burning rods. It was so hot my shirt
and dungarees singed, burned my face like splattering grits but

it was darker than a mine shaft. We were blind as moles.
It smelled foul—like sulfur, rotting roadkill, sour milk.
I screamed, felt like I was thrown into lava. All around me
yelling, screaming, crying, cursing. Never heard the like. Tried to run
but the ground was hot as roofing tar on bare soles. Kept jumping.

Then I felt someone snatch my wrists, pull me upward
and I blinked awake by a tree at dusk. The other miners stirred,
tended scrapes, bruises. I felt a goose-egg on my brow and a bloody lip.
We staggered to the road, hitched a ride to Steeds.” The reporter paused,
put in another cassette. I rocked, sipped black coffee, smoked, flicked ashes.

“That’s about it. Never drank no white liquor since, near sixty years.
Joined a church, got serious about the Lord and the Word. You saved?”
The reporter cleared his throat. “Well, this isn’t about me; it’s about you.”
“Cannot remember those verses dad used to read about,
about some damn train, but I swear, I think I rode on it.” 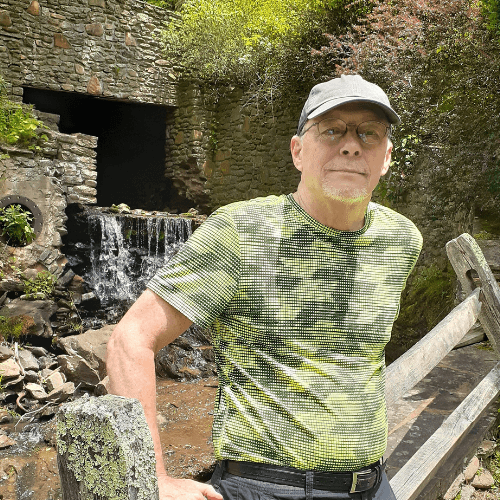