I am forever awe struck by The Trinity. Our Triune God’s LOVE and GRACE, magnificence, and infiniteness, and eternalness, and when it comes to us Their love, design, foresight, creation, and Their desire for family friendship, fellowship and partnership with us.  Their pre-planned rescue and restoration on the Cross, that I focus on throughout.

Also my recent second guessing of The Holy Spirit in the scope of the Covenant promises, my fear that I had reached beyond the seed, son and land that Abram was promised. The Holy Spirit assured me I had not.  It is so clear to me now that Their love Letter to each one of us is The Holy Bible and how They are Everything, and They want everything of us and for you too, including oneness with us. Absolutely Awesome.

Written on the anniversary of anniversaries,
Easter Sunday

An heifer, a goat and a ram
Were brought forth to set the deal
God had instructed Abram
To prepare them for the seal

Hold up, this may knock your socks off,
But, if you’re already on bare feet
It’s time to put your best socks on
And prepare for this ghastly treat

Some background here is helpful
Back then, thousands of years ago
When young kids prepared for marriage
It was Dads time; time for the Dad’s show

Dads, both your shoes and your socks off
Grooms Dad, it’s your place to go first
Go now – walk – through the path of blood
Make this pledge now or you’ll be cursed

Dad two’s turn; he’s now up to bat
No bat, no shoes and no socks!
He’s ready – go – walk through the blood
‘Better I’d be checking my inbox?’

No deal, remember we agreed
For our kids’ future happiness
Thinking ahead – our legacy
Let’s put aside all scrappiness

Returning now to Abram
Who’s obeying his Triune God
With heifer, goat and ram
Wouldn’t you think he was overawed?

Did Abram really understand
All about a blood path covenant?
Was this the first ever set down?
Creating this big precedent

Do we think that we know it all
Because we’ve all heard the history
That raises a major question
Are you aware that it’s His Story?

Methinks, God had a hand in this!!!
As great darkness fell about him
Abram would learn from His God
Big promises for his offspring

I spoke about a Triune God
They who reign in highest station
With unique perichoresis
About which, more I’ll now mention

Wow Lord, I love these words You write
As long as I stay so close to You
And yes, today of all Special Days
To be here and honouring You

After that joyful diversion –
I love these unexpected hugs
Let’s get back to The Covenant
Though not yet a subject that tugs?

The Covenant was for Abram
Note, Abram no participant
A spectator on the sidelines
Our stand-in recalcitrant

So, what on earth does that all mean
Abram was neither in nor out
Just another unworthy man
And a Covenant breaking lout?

So this really is the real deal
Made by I AM, our Loving God
He’ll pay the price for all our sin
No wonder we should all be awed

God separated Himself from Himself
So fully and completely on the Cross
Fulfilling the Blood Path Covenant
Ensuring you and me never see loss.

Forty-two verses: six sevens
Saving us when we were all at sixes and sevens
(sometimes verse counting gives a surprise Hug)

Re-looking critically at Genesis 15, God’s promises to Abram were specifically about a son, a seed and a promised land. Our God is in the relationship business – sharing who They are with Their creation, and through that partnership doing things together in the most unique fellowship ever, modeled on Our Triune God Themselves.

Covenants are for keeping – yet Our Triune God knew from the beginning we individually and collectively are unable to do that.

So, these promises are incomplete, you could say meaningless, if that end Goal of partnership and fellowship never takes place. God thus needed a way to overcome our sin, iniquity and rebellion, hence a Covenant excluding us, committing Themselves unequivocally to Their desired outcome.

The incredible fulfillment of this bloody Covenant was God separating Himself from Himself through the shedding of Christ’s Blood on the Cross by which through GRACE and not the Law (where the New Testament uses ‘New Covenant’ repeatedly) available to ALL people, we might accept and be reconciled to The Creator. Bloody marvellous!

I wrestled with this, and still do at times, as I reflect – and it was this struggle that caused me just over a year later – to be led to write again. I have found that The Holy Spirit gets me started writing when I am stuck, allowing the Word to walk me into new understandings. At this point of writing I was using ‘we’ and ‘us’ much more than me and I, in acknowledgement of ‘peeps’, the collective of my human spirit, my soul parts, my heart and body.

Five years ago, or sixty months
The blood path covenant gripped us
More than that it overwhelmed
Grabbing our imagination thus

Covenanting with another
Yes, fair and square both have heads up
But substituting for the other
Makes no sense to assume their cup

While surety risk removes all risk
Knowing that the other would fail
Why motivate such suicide?
And we’ve not even touched on scale

Imagine too, a punishment
The other fails, surety jailed
Does that seem excessive fervour?
In whose book is surety hailed?

We needs go back, to middle times
Arranged betrothed both bride and groom
Families comfort to protect
Lest either side remove the bloom

And so, devised a covenant
Of blood path nature as Abraham
An heifer or two cut in half
Their blood a path, no epigram

What on earth do you mean by that?
Well, the dads’ pledge to each other
If child proves dishonourable
Severed we’ll be just as the heifer

Now here’s a wild and wacky thought
If one dad trod the bloody path
Bare footed on behalf of both
His hand – surety? crazy math

In Genesis fifteen verse nine
Abram instructions apposite
Take an heifer, goat and a ram
Divide and lay halves opposite

So that ugliest scene was set
Blood pooling a path in the middle
Between both halves, on either side
What! a barbecue with no griddle?

Oh no, mix not the millenniums
Our God had a plan for Abram
In a dream state he needed be
No time here for this epigram

It’s Covenant time for Abram
Dream video behind his eyes?
A Smoking Furnace first passed by
Then a Burning Lamp, The surprise

They passed between the bloody halves
In Covenant making procession
With such implications you’ll see
But so far what’s your impression?

God makes Covenant with Abram
Father God the Smoking Furnace?
But no Abram participates
As the Burning Lamp took his place

From the foundation of the world
God’s intended plan didn’t change
Give man a choice, no robots here
Thus so pivotal was this exchange

Can man stick to his commitments?
Much less Covenant with His God
So, His God stood in for mankind
Guaranteeing Covenant shod

And yes, Abram and his nations
Fell often and repeatedly
Unholiness, all kinds of sin
Iniquity, deliberately

Cut off, rejected and divorced
Lost causes, disbarred forever
Hell bound in our own hand-basket
Snagged by our own endeavour

So Jesus Christ kept God’s faith intact
Despite the tight bond with His Father
And on the blood shedding wooden Cross
They severed themselves from each other.

1 See below “In The Beginning:

One day I was stimulated by Dan Duval in considering the actual impact upon the earth itself and earth’s atmosphere by the presence of the Two Members of The Trinity visiting earth and participating in this landmark Covenant Ceremony.

A whirlwind came out of the north
A great cloud with fire infolding
Brightness and colour from its midst
To us is a great foreboding?

God’s presence in the tabernacle
His moving portal through the wilderness
Column of fire at night, cloud by day
Does this bewilder us more or less?

These Covenant words are quite long
Not as long as our God’s patience
They long for each of us to run
It’s time to can our complacence.

In one of Dan Duval’s1 teachings he dissects the words ‘In the beginning’, Genesis 1:1 at the start of the Old testament.

The foresight God gives us as to His plan’s – right up front, is mind blowing.

This may not be a poem – but it is more than poetic.

Genesis 1 : 1
In the beginning God created the heavens and the earth. KJV

בְּרֵאשִׁ֖ית … translated into: ‘in the beginning’

‘in the beginning’
says all this below, when taken from the rich meanings given to each letter of the Hebrew aleph-bet contained in the six letter word בְּרֵאשִׁ֖ית

Looking at the meaning from deep within the Hebrew ‘we get something along the lines of’1:

‘the body of the highest,
the ox (referring to Jesus),
was pierced with something sharp
by the destroyer, through the hand,
by which he (died and) established
the finished work on the Cross’1

… all within the first six letter
Hebrew word in the Bible!

1 with permission from Dan Duval, Bride Ministries. Another friend … indicated that Jesus likes this!

Absolutely nothing to add 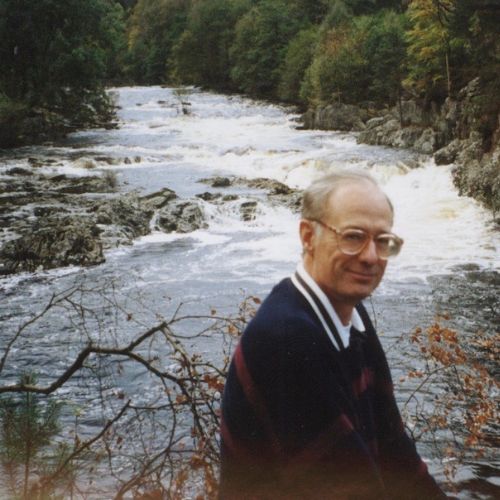 Born in Scotland, lived in England, undeservedly married to Veronica, living in Canada. We have three daughters with wonderful families. An accountant by training, but a career mostly in Canada in varied business environments. After revelation about Our Triune God's Covenant and then retiring in 2014, I started writing poetry to try to understand the source of my childhood confusion and struggles since. The Lord's constant encouragement and love keeps drawing me to express my appreciation.
Click here for more by Peter Will Stevens