It is also Ascension Day today. The last recorded words on Earth that Jesus Christ spoke were: "And lo, I am with you always, even unto the end of the world.” (Matthew 28:29 KJV)

We have had 4 mass shootings in the United States in the last two weeks, and mass shootings have been more and more of a common thing. Yesterday, I saw the news report of a mass shooting at an elementary school, where an 18 year old man shot his grandmother at home first before going into the school, killing 19 children and 2 teachers in Uvalde, Texas.  The gunman then engages in gunfire with the police where he was ultimately murdered himself.

What would possess a person to walk in a school and murder children for no apparent reason whatsoever?

This needs to stop, but sadly, it is only getting worse. Today, we will look at Matthew 25:40, sin against man being sin against God.

The ”King” here is Christ speaking of Himself, the King of Kings and the Lords of Lords. The word ”answer” means ”to respond or begin to speak”. Christ was responding to the questions raised in Matthew 25:37-39, in which He says, ”Then shall the righteous answer him, saying, Lord, when saw we thee an hungred, and fed thee? or thirsty, and gave thee drink? When saw we thee a stranger, and took thee in? or naked, and clothed thee? Or when saw we thee sick, or in prison, and came unto thee?”

In Genesis 1:26-27, the Bible says, ”And God said, Let us make man in our image, after our likeness: and let them have dominion over the fish of the sea, and over the fowl of the air, and over the cattle, and over all the earth, and over every creeping thing that creepeth upon the earth. So God created man in his own image, in the image of God created he him; male and female created he them.”

God created mankind with intention, one being that we would bear His image and likeness in the earth.

God’s idea was that when the world saw us, they saw God, because we would embody the character and attributes of the One who created us. In the midst of creation God equipped us to make a choice on whether or not we would bear His image or likeness in the earth, or choose our own way.

In Genesis 2:16-17, the Bible says, ”And the LORD God commanded the man, saying, Of every tree of the garden thou mayest freely eat: But of the tree of the knowledge of good and evil, thou shalt not eat of it: for in the day that thou eatest thereof thou shalt surely die.’‘  God equips us with choices, but He gives His command, what He requires of those who bear His image and likeness in the earth. After that, the choice becomes ours.

Satan has been busy since the beginning, deceiving and lying to compel people to sin against God. In Genesis 3:1, the Bible says, ”Now the serpent was more subtil than any beast of the field which the LORD God had made. And he said unto the woman, Yea, hath God said, Ye shall not eat of every tree of the garden?’‘

The first thing the enemy does is get us to question God’s commands. If we will question God, then the odds of us defying God becomes stronger. In Genesis 3:4-5, the Bible says, ”And the serpent said unto the woman, Ye shall not surely die: For God doth know that in the day ye eat thereof, then your eyes shall be opened, and ye shall be as gods, knowing good and evil.”

The second thing Satan does is plant a lie in, and make sin attractive, so people will focus on sin and not on God.

The enemy is crafty at blurring the line of right and wrong. This is Satan’s nature. If Satan can destroy our perspective, and blind us from seeing what God desires for us, then He has effectively ensured that sin becomes second nature.

In 2 Corinthians 4:3-4, the Bible says, ”But if our gospel be hid, it is hid to them that are lost: In whom the god of this world hath blinded the minds of them which believe not, lest the light of the glorious gospel of Christ, who is the image of God, should shine unto them.”

The enemy plants seeds of doubt and then blinds those who have no clue who we are in the Lord, and who we were created to be. If the enemy can establish bad seed in us, then we will accept and live by his lies. In John 10:10 Christ says, ”The thief cometh not, but for to steal, and to kill, and to destroy: I am come that they might have life, and that they might have it more abundantly.’” The enemy is trying to steal souls away from the Lord, trying to kill those who serve God, and also kill them to prevent them from knowing and serving God. The enemy is trying to destroy the world and the best instrument he can use is mankind. If he can get mankind to forget or not acknowledge that mankind is created in the image and likeness of God, then it is easy for us to sin against each other.

Just because the enemy has influence, doesn’t mean he has power in a believer’s life.

In James 1:14-15, the Bible says, ”But every man is tempted, when he is drawn away of his own lust, and enticed. Then when lust hath conceived, it bringeth forth sin: and sin, when it is finished, bringeth forth death.’‘

The enemy knows what makes us tick and his influence is in the form of what can sway us away from the presence of God. We have to come into agreement with the lie in order for us to act upon it. We can’t say, ”The devil made me do it.”

We have to accept responsibility for what we accept as truth. When we refuse to hear the truth, no matter how many times God sends people to drum it in our heads,

He eventually says, ”Have it your way”.

In Romans 1:28-31, the Bible says, ”And even as they did not like to retain God in their knowledge, God gave them over to a reprobate mind, to do those things which are not convenient; Being filled with all unrighteousness, fornication, wickedness, covetousness, maliciousness; full of envy, murder, debate, deceit, malignity; whisperers, Backbiters, haters of God, despiteful, proud, boasters, inventors of evil things, disobedient to parents, Without understanding, covenantbreakers, without natural affection, implacable, unmerciful”.

We tend to ask ourselves in the midst of tragedy how God could allow something terrible like a mass shooting to happen? Why doesn’t God stop them in their tracks, or send someone to stop them before it happens? How can a loving God allow babies to be murdered?

The answer to these questions is the hardest to receive, and that is one thing: free choice.

We have the ability to serve God with every fiber of our being and we have the same choice to murder, rob, steal and kill.  When we have free choice, someone can always be hurt by the choices we make.

Don’t mistake God giving us free choice with Him not caring because it grieves God to see sin in the world. God won’t force us to serve Him, and that is a part of the love He has for us.

The reason mass shootings happen in our world is because these people are without the love of God in their hearts, and hatred has been the choice made by the shooters.

In 1 John 4:21, the Bible says, ”And this commandment have we from him, That he who loveth God love his brother also.’‘

Let’s put this together. God created man in His own image and likeness. He formed us from clay and breathed the breath of life in us.

When a person commits sin, they are sinning against God.

Joseph knew this, which is why Genesis 39:9, the Bible says, ”There is none greater in this house than I; neither hath he kept back any thing from me but thee, because thou art his wife: how then can I do this great wickedness, and SIN AGAINST GOD?” Joseph knew that if he laid with Potiphar’s wife, that he would be sinning against God.

In 2 Samuel 12:13, the Bible says, ”And David said unto Nathan, I have SINNED AGAINST THE LORD. And Nathan said unto David, The LORD also hath put away thy sin; thou shalt not die.” David knew when he had Uriah killed in order to take his wife from him that his sin was against the Lord.

Committing murder is like pointing a gun at God and pulling the trigger.

When someone kills another, this is the picture that needs to be seen. Our world is at war against God, and our babies are becoming the victims of the sin that is running rampant in the earth.

I know this firsthand and I bear the sorrow of my actions when I didn’t fully understand what I was doing. With tears in my eyes, I understand now deeper than I ever have before.

Love is the greatest commandment, and with love, sin can’t abound in the world.

Our hearts go out to those beautiful souls murdered, injured, and emotionally damaged by the horror at Robb Elementary School in Uvalde, Texas, and our prayers are with them.

Love is the answer.

‘Marshall, wouldn’t it be great if every member of Congress read this, and took it to heart’. peterwill 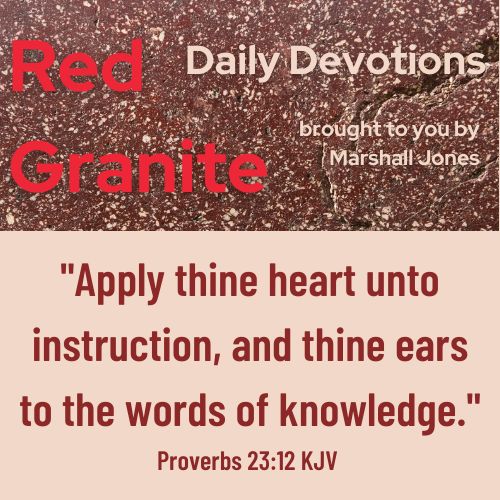 These Daily Devotions are a Red Thread Poets daily offering initiated and written by Marshall Jones as a devotional study of God's Word as a 'verse of the day'. Marshall's Bio and a sample of his poems can be seen on this website, also a link to his published book of poems, A Raven's Meal. The Daily Devotions are dated as seen each day on the Red Thread Poets Facebook page.
Click here for more by RED GRANITE - DAILY DEVOTIONS