The Israelites have forsaken him, forgotten how to bend a knee,

The Lord, in anger over this, delivered them to the Philistine,

Then he decided to show Grace by saying: “I will gift a Nazarite!”

An angel of God came down, spoke to a barren woman in a field,

Told her she would bear a child for God, but there are rules that she must yield,

“No blade will ever touch his head, and his hair will stay unbroken,

For each lock that grows is covenant with God, so don’t stray from what is spoken;

Don’t drink of toxins, eat unclean, teach him God from his first breath,

He’s to be a Nazarite from birth, to put the Philistines to the test”.

So a womb-less woman bears a child, the last mortal judge of man,

A Nazarite in God, gifted strength directly from God’s hand.

They lived secluded on a hillside, mother preaching God to son,

He grew devout in the mighty Lord, understanding what needs to be done.

In adulthood, now a young man, Samson wanted to taste the world,

So he went to explore Timnah, where found himself a Philistine girl,

They courted, laughed, and loved, Samson gave his heart to her so freely,

She returned that love back to him, but the Philistines disagreed with this unity.

When on his way from the hill to city, on bent knee to ask for her wedded-hand,

He was attacked by a hungry lion, who leapt straight out of the sand,

He fought, but found he was quite lacking, and the Lion mounted him,

When, in an instant, he felt the Divine of God letting mighty strength flow in.

He ripped to shreds the predator, and knew he was gifted a great prize,

But he kept this secret to himself, afraid others would think it lies.

He asked the girl to marry him, she agreed, now Israelite and Philistine,

Pledge their love for one another, bound together in God and throughout time.

But, fierce-tempered Samson still stayed much at odds with the Philistines,

Their mutual hatred festering and feud intensifying over time,

And in his vengeance one day, Samson caught three hundred foxes,

Tied flaming torches to every pair of tails, which burned down all the crops,

The olive groves and vineyards of the Philistines went up in flames,

They retaliated by burning his wife and her father to death in a similar way.

Fueled by grief and revenge, Samson fought, took many soldiers down,

And ran to The Rock of Etam, to then rest a while and settle down,

And encouraged the men of Judah, so they would bring him into town;

Samson did not fight, held his unresisting hands to freely bind,

Gave himself as noble sacrifice, to ensure the future of his kind,

But calm, accepting, and unafraid, Samson sat in stocks and thought and prayed,

Until a Philistine general taunted with: “All your people are doomed to die today!”

The mood around all darkened and a fire sparked in Samson’s eyes,

He broke his bindings, found a donkey jaw- bone, which he then ripped from side to side,

With these two clubs of God swinging around, Samson attacked all of the unclean,

Killing thousands, be him just one man, truly a judge from God . . . praise be!

Philistines now feared him greatly, and as he fled, he promised to,

Redeem his people out of slavery, just like the mighty Moses would do!

She lived in the valley of Sorek and he thought no other lady was finer,

This soldier and judge of God was unaware this lovely rose had thorns,

For Delilah would deceive him, betray his love, leave Samson all forlorn.

At first, they both seemed happy, then the rulers offered a bribe to her,

Said one thousand, one hundred silver, if the secret to his strength she could learn,

Delilah did ask Samson, but three times he told her blatant lies,

She sulked and nagged, persuaded him, to speak the truth into her eyes,

In greed she took the ruler’s bribe, then settled Samson in her lap,

And shaved the strength from off his head – all his hair, as the mighty man just napped.

Samson woke up with a start, when Delilah shouted for the Philistines,

But he couldn’t fight them off, as had no power of God – no strength divine,

Now hauled before the governor, poor Samson’s weak, betrayed by a lover’s lies,

Forced to his knees, a prisoner, then the ruler gouged out both his eyes.

Then the high priest invited to the temple, all the Philistines,

To worship their God “Dagon”, thank him for Samson’s implied demise.

The Philistines were happy, very smug and self-satisfied,

When Samson was led into the temple, stumbling, weak and blind,

Unsure of much, but knowing that his God is always faithful,

Samson humbled himself before him, loyal servant, scared but grateful.

The Philistine crowd demanded that mighty Samson should perform,

To entertain them for their pleasure, in this heathen temple they’d adorned,

They were sensing they were victorious and were gloating in their own power,

As Samson looked so helpless when placed between the awesome pillared towers.

Then, all fell silent for a moment, and Samson prayed unto The Lord,

“I love you, I follow, I believe in you! Please grant me awesome strength once more”.

Re-strengthened, he struck the huge temple pillars, causing the whole structure to breech.

And so, a chosen judge was left to judge, in that instance, in God’s divine and guiding Grace,

And the whole temple came tumbling down, killing Samson and everyone who stood in that place.

A COLLABORATION FROM OUR BOOK “INSPIRED BY…” 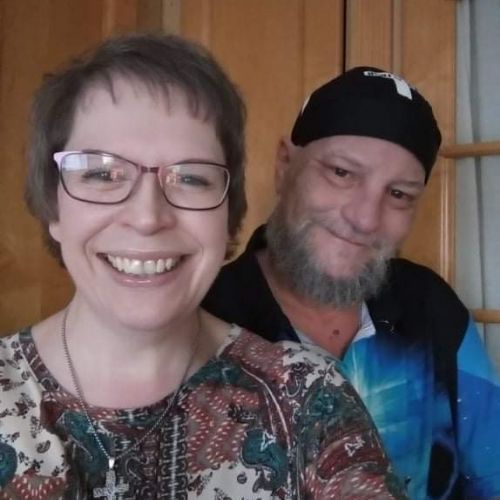 Michael Grgich Founder in 2015 of FAITH, HOPE, AND LOVE, a Facebook Poetry Group, and Suzanne Newman also an ‘Admin’ in the group since 2017, have collaborated in joint projects for a number of years. The have jointly published “Inspired By…” a poetic journey through some of the main points of the Bible, and additional poetic works. Here is a sample. See Published Works on our Resources page for more about their first book “Inspired By…”. We understand there is a second book in the works called “Kindred Spirits”
Click here for more by Michael and Suzanne Collaborations