Headed to England for Christmas

This description may be from another edition of this product. In this bestselling Christmas story, a pilot needs a miracle to make it home It is Christmas Eve, 1957, and there are cozier places to be than the cockpit of a de Havilland Vampire fighter plane. But for the Royal Air Force pilot who has just taken off from West Germany, this single-seat jet is the only way to make it back to England for Christmas morning. His flight plan is simple; the fuel tank is full. In sixty-six minutes, he will be back in Blighty. But then the plane begins to fail. First the compass goes haywire, then the radio dies. Lost and alone above the English coast, the pilot is searching for a landing strip when the fog closes in, signaling certain death. He has given up hope when a second shadow appears–a Mosquito fighter-bomber of World War II vintage. The plane is a “shepherd,” guiding the Vampire to a safe landing, and its appearance is a gift from fate, a miracle out of time–but for one lonely pilot, the mystery has just begun. A classic bestseller, beloved by aviation fans (including actor John Travolta, who calls it “one of my favorites because it personalizes the two planes”) and general readers alike, The Shepherd is a gripping, heartwarming tale for a cold winter’s night. 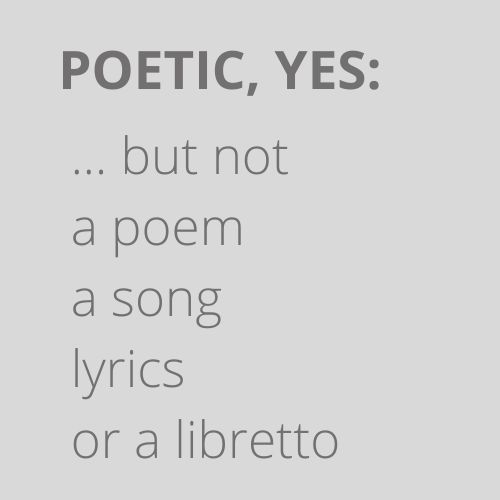 poiēma (poy’-ay-mah) ‘his workmanship’ see Ephesians 2:10KJV. Glorying in our creation and in The Creator, we are compelled sometimes to go beyond the poem, the songs, the lyrics and even the libretto, and honour the 'poet' and his workmanship. If you have something that fits “Poetic? YES” please let us know.
Click here for more by Poetic? YES